Tony Sanderson was a Firefighter at Blackwall Fire Station who appeared in series 1, series 2 and series 3, when he left the Brigade to open a boutique with his new girlfriend.

Tony joined Blue Watch at some point between the television movie and series 1 as Ethnic‘s permanent replacement. He was married to Dorothy but the marriage had its troubles. Their money worries got so desperate that Tony stole the money that Blue Watch had raised for a boy's operation. However, he could not go through with it and discreetly returned the money with Josie's help.

Dorothy was also a shopaholic and couldn't stop running up debts on credit cards. When she borrowed money from a loan shark, Tony angrily returned the money to him the same day. There was an undercurrent of tension in the marriage because it was an interracial marriage, especially when their parents met up. Tony was unhappy when Dorothy got a job as a cocktail waitress at a nightclub, and they slowly drifted apart.

Tony befriended a young window cleaner named Curly who had been impaled on sharp railings after falling from his ladder, and got angry when a nearby woman tactlessly remarked that the boy's condition was hopeless. Tony was upset when the young man died moments later. He met Curly's father, who thanked him for his efforts. He supported John Hallam when Hallam testified at the disciplinary hearing of a group of racist officers who had almost killed a black fireman, Desmond Maddox.

Tony and Dorothy eventually divorced and he subsequently got back with an ex-girlfriend, Jenny. Tate invited him and Jenny to dinner, although Tony was annoyed when Tate used the occasion to suggest he take part in a campaign to recruit more ethnic minority officers. Tony left the watch after series 3 to help Jenny run her new boutique.

I'm a fireman not a financial tycoon 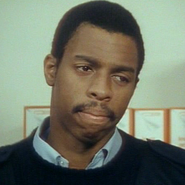