Roland Oliver Cartwright, nicknamed "Vaseline", was a Firefighter at Blackwall Fire Station from the pilot movie through series 2.

Vaseline, so called because he was slippery and a womanizer, had three wives (each named Marion) and numerous mistresses and was always moonlighting in secondary jobs. In the movie he was portrayed as bigoted and misogynistic, particularly in his attitudes to Ethnic and Josie Ingham, although he became more of a likeable rogue during the series.

By the time of the pilot movie Vaseline had already been married twice. A day after his divorce from Marion 2 came through he married Marion 3 (despite Marion 2 gatecrashing the wedding). He and Marion 3 bickered constantly, as she rarely knew where he was or what he was doing. He once didn't return home for two days and when he finally did she caught him disposing of a condom wrapper. Vaseline had a son with Marion 3, who they named Damien, which most of the watch thought appropriate given that Damien was the name of the Devil's son in The Omen. They also gave him the middle name of Sidney after Station Officer Tate.

Once on a shout Vaseline's boots caught fire because they were covered in sodium chlorate (a weedkiller and oxidising agent) he had been using them for gardening. On another shout, he accidentally ran over a cat they had just rescued. He did some work for a builder named Big Eddie, but after accepting an advance on his pay he didn't return, so the irate builder came to the station looking for him and had to be dealt with by George. Over Christmas he moonlighted as a chauffeur for George's brother-in-law Cyril, and accidentally crashed the car into the living room of a nearby house. He also worked in a wine bar, which he described as being like "a squirrel in a nut factory", given the number of young and attractive women who frequented it.

A serial womanizer, Vaseline chatted up a prostitute Blue Watch had just rescued from a lift. While on duty he tried to sneak off to the car park with her but kept getting interrupted by the bells, so she walked out on him. In hospital having his burnt feet treated, he tried to chat up one of the nurses (also called Marion); Marion 3 then appeared and attacked the nurse who was giving him a bed bath and had to be escorted out. He did some gardening for a posh woman, and ended up sleeping with her.

To Vaseline's horror his first wife Marion then turned up claiming he owed her money, and Marion 3 allowed her to stay. The two continually ganged up on him and at one point he got into bed with Marion 1 by mistake, and she blackmailed him into staying. He told Bayleaf: "Marion 3 thinks I'm giving Marion 1 one too!" They also made him babysit his son while they went out and to his surprise he enjoyed it. When Sicknote cajoled everyone into attending his performance of The Student Prince, Vaseline sent the two Marions while he babysitted again.

While the pump crew were checking fire hydrants along the Surrey docks, a nearby van fell into the Thames. Vaseline, Bayleaf and George dived in to rescue the driver, but Vaseline did not resurface; his BA set had malfunctioned underwater, drowning him. At his funeral, Josie revealed that Marion 1 was also pregnant, to the amusement of the watch. 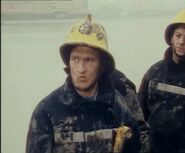 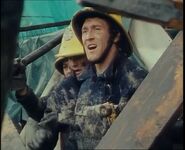