Raymond 'Pitbull' Derby was a Red Watch firefighter at Blackwall Fire Station from Series 8 to series 13.

Pitbull was a loud and obnoxious bully who previously served at Borough Street with Recall before the latter transferred to Blue Watch. He joined Blackwall in Series 8 as Jaffa Parrish‘s replacement in Red Watch. He enjoyed winding up members of Blue Watch, and was always on hand with a barbed remark whenever someone was at a low ebb. On his first day he wound up George about Jaffa standing in for him the night he was injured. He also sneered at Geoff Pearce over the rumours that he had murdered Patti and nicknamed Jack Morgan "Jonah". However, he wound up Jack once too often, so Jack invited him into a storeroom, and punched him. John Hallam warned Pitbull about winding members of Blue Watch up and told him to keep his mouth under control.

Pitbull tried to become Blackwall's union representative, and lost out to Recall by one vote. He was reprimanded for making a racist remark to Two Tone, after telling him to stick the new computers "up his arse" and saying they were "white man's magic". As union rep, Recall was forced to defend him. Pitbull was let off with a warning and a heavy fine of £700, but showed little gratitude for Recall's troubles. Pitbull took part in the talent contest at the Ship Aground, his "talent" being consuming a large amount of lager. However, he ended the night throwing up outside and claimed his beer had been spiked.

Surprisingly, Pitbull had a horticultural side and spearheaded Blackwall's bid to be named the area's best kept station. However, their bid was disqualified after it emerged that he had attempted to bribe the judges. Pitbull had a fondness for horse meat, and served it up at Blackwall's bake off as "viande chevaline", to the disgust of the other members who unwittingly ate it. When Pearce reluctantly gave up his beloved dog Bruno because Fiona was allergic to him, he gave him to Pitbull, who renamed him Tyson, although he was forced to give him back by Blue Watch after it was found out Fiona was no longer allergic to Bruno.

Occasionally Pitbull showed compassion towards other members of Blue Watch, like when Recall and Jack were injured and when Sally planted a tree in memory of Joe, but this was very rare. He mentioned how he never liked Joe, but was nevertheless a good firefighter. He was also sympathetic towards Sally after she was raped by Sean Bateman and told Bateman he was disgusted by his actions. 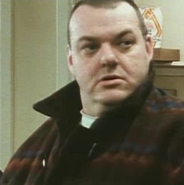