Nicholas 'Zorba' Georgiadis was Blue Watch’s second and longest-serving Station Officer at Blackwall Fire Station from series 4 to series 10 & was promoted to Station Commander before he died in series 11. He was nicknamed "Zorba" due to his Greek-Cypriot heritage.

Nick Georgiadis joined the Brigade in 1981 had worked at the fire stations of Paddington as Fireman, Manchester Square as Leading Fireman and Tottenham as Sub Officer over eight years, before serving two years as a Temporary Station Officer at the Brigade training centre. He took over as Blue Watch's permanent Station Officer in series 4 following Sidney Tate's retirement, and was unimpressed with some of their laxidaisical ways, particularly when Bayleaf, not knowing who he was, directed him to Hallam's office with the words "up there, mate". Nick introduced a more disciplined regime, insisting on strict adherence to the rule book. He never needed to raise his voice to command discipline, and actively discouraged Hallam from doing so on call.

Nick was immediately given the nickname "Zorba" [Zorba the Greek], which he disliked, and told the Watch not to use it when he was nearby. On several occasions he clashed with Kevin Medhurst over his insubordination; at his 35th birthday party, Nick punched Kevin after he had drunkenly insulted him. He did not see eye to eye with Malcolm Cross either, not appreciating Malcolm's penchant for pranks and jokes, or the cocky Billy Ray. However, he also had a softer side and held the Watch's respect. When Bayleaf's daughter Melanie was kidnapped, he loaned Bayleaf the money to hire a private investigator.

Nick was from a Greek-Cypriot family. His uncle Demetri ran a restaurant and another, Yannis, was in the clothes trade. He always resisted their attempts to find him a wife. One of their proposed matches was his cousin Ariadne, but Nick was uninterested. Ariadne subsequently married Pedros, but was unhappy and soon after began an adulterous affair with Nick. Despite being threatened by Yanni to stay away or risk dishonouring their family, they continued and she fell pregnant with his child. However, Ariadne fell down a flight of stairs during a row with Yanni and died of her injuries, although their son Costas survived. Nick fell into a depression after her death and gave up Costas to be cared for by his grandparents.

At a Brigade conference Nick became friendly with a Dutch firewoman, Marianne. She subsequently arrived at Blackwall on an exchange trip and they began a relationship, but were parted when Marianne had to return home. They were reunited when Nick was sent on the reciprocal trip to the Netherlands, where he impressed Marianne's crew (though not Marianne), when he dived into a canal to save a drowning woman. Nick decided he wanted to see more of Costas, so brought him back from Cyprus to live with him, along with Ariadne's parents Evgenia and Costas. Marianne then unexpectedly turned up at Nick's house in London and moved in with them.

In series 11 Nick was promoted to Assistant Divisional Officer. In Episode 2 (series 11) he mentioned he was engaged to Marianne Frankel and the wedding was going to be the following year. He felt uneasy when he had to return to Blackwall and had doubts about the suitability of his successor, Chris Hammond, especially after discovering that Hammond had substantial gambling debts. Nick arrived at a cinema fire in which both Marianne and Costas were trapped. He rushed inside and was leading them out of the building with Dan Barratt's help when part of the roof gave way. He pushed Barratt, Marianne and Costas out of the way, but the roof collapsed on him, killing him instantly.

"Just to refresh your memory, If a member of the public walks in off the street you address him as "Sir". If he asks you for the officer in charge, you take him to the officer. If you point and say "up there, mate", and he turns out to be your new Guvnor, you're going to look very stupid when you find out."

― Nick reminds Bayleaf of how to behave when on duty

"He’s different, I’ll give him that. About as different as chalk and cheese from old Tate."

— Bayleaf on the difference in leadership between Nick Georgiadis and Sidney Tate. 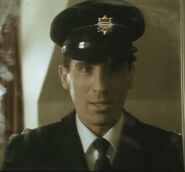 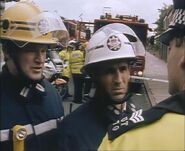 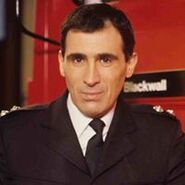 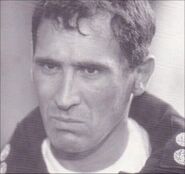 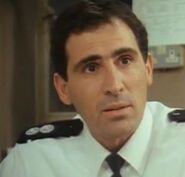