Michael (Mike) David Wilson, nicknamed "Bayleaf", was a firefighter and mess manager at Blackwall Fire Station before retiring from the watch at the end of series 8 to run a restaurant. Bayleaf was one of the longest-serving characters. He was portrayed by the late James Hazeldine.

Mike Wilson joined the brigade in 1970 and was a popular and well-respected member of Blue Watch, being the second longest-serving member after Station Officer Tate. He got his nickname from his role as mess manager, although later in series 6 he let Billy Ray take over the role. Bayleaf often provided a sympathetic ear for other members of the watch, who would confide in him with their problems. He received his 20 year service medal in series 3. During series 1 he became estranged from his first wife Karen, with whom he had a daughter, Melanie. He was granted custody of Melanie after Karen suffered a mental breakdown.

Bayleaf was close to firewoman Josie Ingham and they had a brief fling. He then met Clare, a fireman's widow, after Sandra Hallam set up a blind date for them. Eventually he and Clare married. Karen returned in series 5 determined to regain custody of Melanie, and then kidnapped her. A private investigator located Melanie in Spain, so Bayleaf flew over and brought her back home with him.

Bayleaf was called upon to climb a high rise crane to talk down a mentally disturbed young man who was threatening to commit suicide. He almost succeeded, until the man was frightened by a passing helicopter and fell to his death. While rushing to a shout, Bayleaf swerved to avoid a speeding motorcyclist and crashed the appliance into a car, resulting in one of the car's passengers being paralyzed. He subsequently had nightmares about the accident and received death threats from a relative of the victim. He also fell out with Geoff Pearce, who claimed not to have seen the motorcyclist. He was later cleared in court of any wrongdoing.

After a series of near misses, including being buried alive during the 20 pump warehouse shout, assaulted by an escapee at a young offenders prison, and almost being hit by a falling manhole cover, Bayleaf began to consider his future in the Brigade. He and Claire bought a restaurant in Littlehampton, and after being conned by their business partner, decided to put all their efforts into turning the restaurant around. Despite Nick's efforts to dissuade him, Bayleaf was adamant and went through with his decision to retire from the service. He returned to Blackwall to be a pallbearer at John Hallam's funeral. 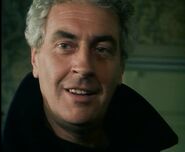