Malcolm Cross was Leading Fireman at Blackwall Fire Station. He made his first appearance in the pilot movie and his last in series five, when he left to go to Brussels with his girlfriend Helen.

Malcolm belied the firefighter stereotype: he was posh, articulate and well educated; he spoke French and Punjabi, and was fond of Yeats and Tennessee Williams. He was born in India to well-to-do parents and attended a prep school in Hove. He considered joining the London Fire Brigade as his way of rebelling against his stuffy family, and it was apparent that his choice of career was a source of friction with them. In the pilot movie Malcolm had a wife, Betty, but she was never mentioned once the series began.

Malcolm enjoyed the humourous aspects of the job. He was in hysterics when they had to free a yuppie who had been concreted into his toilet naked. He told Station Officer Tate that wheezes were the only thing that kept him compos mentis in the job. Malcolm was often the instigator of pranks at the station, which included wolf whistling at female passers-by through a radio on a dummy dressed in fireman's uniform, persuading Colin that he was required to sign the Official Secrets Act and leading the entire watch to sing along at Sicknote's performance of The Student Prince.

When Vaseline drowned on a shout, Malcolm blamed himself; as the ranking officer at the scene, Malcolm had authorised Vaseline to use BA underwater, even though it was not designed for such use. ACO William Bulstrode and Sidney Tate recognised that Malcolm had given the order to save lives and he only received a warning. Later, Malcolm was awarded a commendation for bravery after rescuing a man buried when a trench collapsed at a building site. Malcolm struck up a friendship with Samina, a factory worker whom he met during a fire safety inspection, impressing her by speaking Punjabi, and was heartbroken when she died in a fire.

Malcolm's penchant for pranks and jokes often brought him into conflict with his superiors; ADO Scase threatened to have him thrown out of the Brigade for the wolf-whistling prank. Tate's successor Nick Georgiadis (who he rarely got on with) was furious when Malcolm led the watch in stealing the dentures of the Borough Street Station Officer in retaliation for them stealing Blackwall's station mascot, Bulstrode and put him in his place when he threatened him with dismissal if he pulls off one more piece of idiocy. In series four Malcolm took on Helen as a flatmate and prevailed in a battle for her affections with her married boss/paramour Peter when the latter inadvertantly drank cognac spiked with horse laxative. In series 5 Helen accepted a new job in Brussels and after giving it a lot of thought, Malcolm decided to leave Blackwall to go with her. He handed in his resignation to Georgiadis, broke the news to the disbelieving watch members, had one last look around the station, and left that day.

"Whats on the other card"

One Hundred and Forty! Infinity! 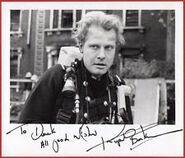