London's Burning: The Movie (also known as the Pilot) was the pilot movie of London's Burning. Written by BAFTA-winning screenwriter Jack Rosenthal, it was first broadcast in the UK on ITV on 7 December 1986. Most of the cast reprised their roles when London's Burning was commissioned as a series two years later.

While Sicknote moans about his toothache, Blue Watch are awaiting the arrival of a new crew member. To their horror, it turns out to be a woman: Josie Ingham, Blackwall's first female firefighter. Most of them are hostile. At her first shout they ignore her completely and leave her to control the crowds. Vaseline gets married for the third time, to a third woman also named Marion. The ceremony is disrupted when his ex wife Marion turns up and causes a scene.

Blue Watch are called to rescue a 'trapped' man, but to their amusement it turns out he has trapped his private parts in a curtain ring. Josie resolves the situation by suggesting he use ice to reduce his 'swelling'. The incident breaks the ice with the male crew members and they start to warm to her. They try to come up with a nickname for her, but none of them seem to stick. The watch are called to a house fire and rescue three children trapped in a burning house, but one of them is already dead. Bayleaf angrily rants at the mother when he realises she had left the children alone in the house to go to a disco.

Ethnic is promoted to Leading Fireman at Archway, so Blue Watch plans a surprise leaving dinner for him. The day before his last shift, he takes a day off. Two policemen are patrolling Ethnic's estate when they are attacked by rioters.

As cars are firebombed, the watch arrives and they quickly find themselves under attack. Despite being told to stay together by Tate, Charisma is separated from the rest of the watch and is attacked by a group of rioters. Although off duty, Ethnic decides that he can't just stand there and watch, so he rushes to Charisma's defence and fights off his attackers. He is labelled a "traitor" by one of the rioters, and a concrete slab is thrown at him from a balcony, striking his head and killing him. Charisma returns to find his dead body.

The next day, the watch silently eat what was to have been Ethnic's surprise leaving dinner. Charisma starts to cry but he holds back his tears as the watch is called to roll call.

There were several "shouts" in this movie, one to garages alight one to a shed fire, and the main one was a street disturbance where the pump was also destroyed. 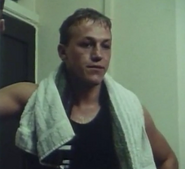 Ethnic is stopped by two policemen 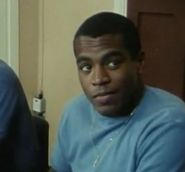