Kevin Medhurst was a Firefighter at Blackwall Fire Station from series 1 to series 8 and appeared once more in series 12.

Kevin Medhurst joined Blue Watch mid-way through the first episode of series 1, initially as a temporary replacement for Vaseline who was in hospital after his feet got burnt. Having recently completed his probation, Kevin became a permanent member of Blue Watch after Vaseline returned to work. He initially felt he didn't fit in and considered transferring away. He became a good friend of George Green, and was best man at his wedding. Kevin occasionally got himself into trouble at work with his tendency to answer back and question orders. Station Officer Sidney Tate warned him about his attitude. He clashed with Tate’s successor Nick Georgiadis on numerous occasions shortly after Nick’s arrival. Sporting injuries from a fight with his sister's boyfriend, Kevin argued with Nick about being unfit for duty, and received a stern dressing down. At Nick's birthday party, Kevin drunkenly tried to proposition Nick's teenage sister and then insulted Nick, so Nick punched him.

Kevin was from a troubled family: his father Jim was perennially in prison (and turned up at the station on Christmas Day after escaping), his younger brother Micky was wayward and kept making hoax calls to Blackwall (and was then sent to a young offenders institute), and his sister Venetia was in an abusive relationship with her boyfriend Rick. Kevin confronted Rick about it, but was overpowered by Rick and his friends and beaten up. Kevin and George got their revenge a few nights later. Micky returned in series 8 and attacked Maggie at the station, after which Kevin disowned him for good.

Outside of work, Kevin was a part-time mechanic and gambler. He hustled Charisma in a game of snooker, but returned the money after being browbeaten about it by George, Tony and Malcolm. His father was released from prison because he was dying, and continued to cause Kevin problems. Kevin won a greyhound in a poker game and named it Blue Watch; Bayleaf, Colin, Billy and Recall all bought a stake in the dog and it was successful until Jim doped it. However, after his death Jim left Kevin all the money he had won betting against Blue Watch.

Kevin had on-off relationships with Vaseline's widow Marion and firefighter Sally Reid, but neither lasted. He then began a relationship with Remy, his new houseboat neighbour. When Kevin returned home to find that Remy had left without warning, he went on a drunken bender before packing his bags and leaving Blackwall for good. In later episodes it was mentioned that Kevin had taken a job at the Brigade's training centre in Southwark. He returned for Geoff Pearce's wedding in series 12. 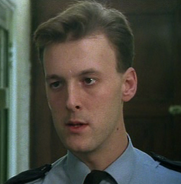