Josie Ingham was the first female Firefighter at Blackwall Fire Station, appearing from the pilot movie until the second episode of Series 3 when she transferred to Charlton. She returned for the Series 3 finale and the final two episodes of Series 4.

Josie was from a firefighting family, her father and brothers were all in the Brigade. It strained her relationship with her mother though, as she expected Josie to settle down and start a family. After joining the Brigade in 1985 she was transferred to Blackwall in 1986 as the first female firefighter at Blackwall and as such was shunned by most of the male members; initially only Bayleaf and Ethnic would talk to her. Eventually she won their trust and fitted in, especially after a shout in which a man had got his private parts stuck in a curtain ring, which she resolved by suggesting he use ice to reduce the 'swelling'. The watch tried to give her a nickname - suggestions included the 'ice maiden' and 'kicker' [wouldn't kicker out of bed]- but none of them stuck.

Josie was married to Gerry, but he struggled with being a 'fireman's wife' and was suspicious of her close friendship with Bayleaf. The marriage eventually ended in divorce. She and Bayleaf grew closer, culminating in them sleeping together one Christmas. Though she regretted having done so, they made up and Josie struggled to hide her jealously when she saw Bayleaf and his new girlfriend Clare together. Josie took Spanish lessons at evening classes and was nearly raped by David, a man she met there, but managed to fight him off.

Josie took her Leading Firefighters exams, becoming one of the first women to pass them, and left Blackwell to transfer to Charlton during the first two episodes of Series 3. As a parting gift, Blue Watch hired Technique as a stripper at her farewell party. Almost immediately afterwards, she spotted David in a shopping centre and caused a scene until he was arrested and charged with her attempted rate and also the rape of another woman. Josie soon found herself acting up as Sub Officer and adeptly took command of a tar spill where she met up with Blue Watch and later had dinner with Bayleaf.

Josie made a brief return to Blackwall at the end of Series 3 for Station Officer Tate’s retirement party. She was seen again in the last two episodes of Series 4 when she reunited with Blue Watch at a huge warehouse fire and was among those who helped rescue Bayleaf, who had been buried alive — these would be her last appearances in the show. 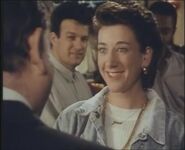