John Hallam was Sub Officer at Blackwall Fire Station. He made his first appearance in the pilot movie and his last in series nine, when he was killed in the line of duty.

John Hallam was Sub Officer at Blackwall for over a decade. He was dour, strait-laced and a reliable career-minded officer, given to remarking "I'm impressed", be it genuine or ironic. He was married to the bossy Sandra, who was constantly urging him to try for promotion. In early series the Hallams had children, but they were never referred to in later episodes.

John was not pleased when his elderly father-in-law Albert moved in with them, especially as he insisted on pulling out his prized plants, thinking they were weeds. John was left embarrassed after calling out all 6 LFB Emergency Tenders to look for an alleged missing person on the say so of an alcoholic homeless woman; the individual they were looking for then reappeared, unharmed. He was delighted when Albert eloped with an old lady from the care home and got married. On Christmas Day, Albert came to stay and doused the Christmas pudding with brandy and when John lit it it blew up in his face, singeing his eyebrows. The watch couldn't contain their amusement, and sang "Ding dong merrily on high, the Sub has got no eyebrows!"

During series 2, he was appointed temporary Station Officer at Borough Street, where it was apparent that a group of racist firefighters were victimizing Desmond Maddox, a black firefighter who they almost drowned. Hallam testified at their disciplinary hearing, and they were all dismissed from the service. For his part, Hallam pleaded guilty for lack of supervision, and was fined 1/7 of his pay for 13 weeks. While on a course with his friend Duffy, he refused to join in Duffy's womanizing and hi-jinks, so Duffy smeared lipstick on John's underwear. Sandra was fuming when she found it and made him sleep on the sofa; he returned to Blackwall to be greeted by everyone singing "Have you seen the y-front man?".

He applied for the position of Station Officer after Sidney Tate retired, but was unsuccessful, which became a source of tension between Hallam and his new Station Officer, Nick Georgiadis. Expecting John to be promoted, Sandra had arranged for their kitchen to be refitted. In recompense, Bayleaf, George and Kevin offered to do it instead, though it went wrong and they were left with a hole in their kitchen wall for weeks. At the 20 pump warehouse fire, Hallam was buried alive for hours and had to be dug out. His psychological state subsequently deteriorated, despite his insistence that he was fine, and he broke down with Sandra in front of Georgiadis. After visiting a counsellor and spending some time in convalescence, John was eventually fit enough to return to work.

He was seconded to work for the Fire Investigation Unit alongside Peter 'The Whale' Jonah and when Jonah retired from the Brigade to work for a private firm, he asked Hallam to be his assistant. Despite the higher salary on offer, Hallam was horrified by the prospect of spending the rest of his working life in an office, so he turned it down, much to Sandra's fury. Irritated by John's lack of ambition, Sandra decided to forge her own career. She proved a success and frequently went on business trips abroad. During one of Sandra's trips away, John was introduced to Jenny Matthew, a psychology student who wanted to interview him about his past traumas, and they ended up sleeping together. John broke it off, but Jenny continued to call him. Both Geoff Pearce and Sandra eventually found out, and he admitted the affair during a blazing row with Sandra, who then walked out.

En route to work that night, Hallam accused Pearce of telling Sandra about the affair. Blue Watch were then called to a fire in a high rise building, and Hallam and Pearce went in to find some missing girls. While leading them across a platform, it gave way under John's feet and he slipped down to the edge. He was unable to hold on, and fell 80ft. He was rushed to hospital, where he died of his injuries on 6 October 1996. At Sicknote's instigation, a plaque was unveiled near the spot where he died. Hallam's grave was seen, along with Sicknote's and Joe Walker's, when Geoff Pearce was telling Hi-Ho about the firefighters who had died in the line of duty. 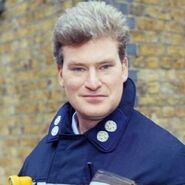 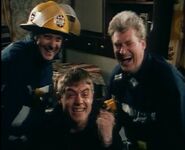