George Green was an unsophisticated ex-boxer who joined the brigade in 1980. He became a member of Blue Watch at some point between the pilot movie and the start of series 1 as Rambo’s replacement. While moonlighting as a Minicab driver for his brother-in-law Cyril, he was arrested for kerb crawling after offering a lift to an undercover policewoman and spent most of Christmas Day in a police cell.

George met Julia when he was chauffeuring at a wedding. He asked her out and she bluntly turned him down. He finally won her over with help from Malcolm and Sicknote (Malcolm wrote her poetry and George mimed to Sicknote's singing outside her house), but she left him because he was paranoid about her seeing other men. George spent weeks pining for her and came to blows with Malcolm, after Vaseline saw him and Julia leaving a wine bar together, which landed them both in trouble with Tate. Moments later George saved Malcolm's life on a shout in a sewer.

Encouraged by his sister Beattie, George joined a ballroom dancing group, where he met Kelly, but to his embarrassment, Bayleaf got hold of a copy of his and Kelly's dancing sessions, and showed it to the watch. George and Kelly married and had two children, Ruby and Shaun. He had a fraught relationship with his in-laws, and constantly bickered with Kelly's interfering mother Lil and her two obnoxious brothers, Les and Denzil; at their wedding, George finally snapped and decked them both. George did a series of jobs for Kelly's brother to earn extra money; he worked in a burger van, but accidentally burnt it down, and helped move a piano, but ended up dropping it.

George made occasional returns to the ring. He was persuaded against his will by the other members of the watch to box in a Brigade tournament, although in the event he was unable to compete as he injured his hand dealing with Big Eddie, a fearsome builder who was looking for Vaseline. In series 6 Jaffa Parrish persuaded George to box for the Brigade against a police boxer, and Billy took it upon himself to train him. He also participated in an unlicensed bout, in which he took a beating against an opponent nicknamed The Terminator, and was disgusted when he learned it was fixed and Billy had won money betting against him, so refused his share of the money.

Cyril returned and persauded George to help him run his gym, which was being bankrolled by a local gangster named Elkins. The gym then caught fire while Kelly and Beattie were still inside, and George suspected Elkins was responsible, so he, Jaffa Parrish and Jack Morgan paid him a visit and took their revenge by beating up Elkins and one of his heavies. Soon after, George was badly injured including breaking both of his legs after turning over an appliance while racing to a shout and was off work for months.

Kelly grew more independent minded and their marriage became more strained. She went on holiday to Spain with her friend and he suspected she had had an affair out there. She then got a job as a barmaid and started attending evening classes at college. At Geoff Pearce's wedding George spotted Kelly kissing Station Officer Chris Hammond and realised they were having an affair. He moved in with Hyper and never forgave Kelly, telling her he wanted a divorce. When Chris appeared at Eve Pearce's christening George was enraged and punched him. Around the same time he got friendly with Andie, a woman who ran a gym, when she asked him to give her son boxing lessons. During series 12 George received his 20 years service medal. He and Andie subsequently got married. By series 14 he was the last survivor of the original Blue Watch.

It is believed by many fans that he was Rambo’s replacement. Despite not having appeared in the pilot movie, he was acquainted with Liver Salts, a firefighter who had left Blue Watch before the pilot — before George joined Blackwall. 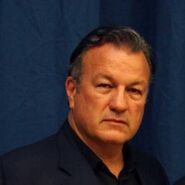 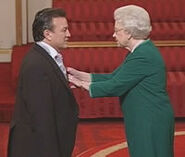