Geoffrey Arthur Pearce, nicknamed "Poison", was a firefighter at Blackwall Fire Station from 1993 to 2002, serving as Leading Firefighter in Blue Watch from Series 6 to Series 10 and then as Sub Officer from Series 11 to Series 14.

Geoff Pearce was Malcolm Cross's replacement as Leading Firefighter at Blackwall. He was originally from the West Country and had been a Sub Officer in Bristol, but accepted a demotion in order to transfer to the London Fire Brigade. Pearce always struggled to fit in with the watch. He was humourless, pedantic and had an irritating catchphrase ("chop chop") when giving out orders. Pearce incessantly grovelled towards his superiors by offering them cups of tea and congratulating them on their decisions. He also had a habit of stirring up trouble by telling tales, spreading gossip and rumours around the station, and grassing up other watch members. All of this quickly earned him the nickname "Poison Pearce".

Geoff was married to Patti. Like her husband, Patti was also a troublemaker and tried to seduce John Hallam; Pearce confided to Hallam that they moved away from Bristol after Patti made a pass at a senior officer. He had an uneasy relationship with Hallam, who was unimpressed when Geoff and Patti bought a house in a nearby street, and when Geoff talked himself into getting a lift to work from John every day. Sandra Hallam had little regard for Geoff or Patti, considering them both oddballs and stirrers.

Pearce rarely got on with Billy Ray, who enjoyed playing pranks on him, including pouring salt into Geoff's milk (which he didn't notice), and filling a lavatory with fire extinguisher foam just before Geoff used it. They clashed when Billy (wrongly) suspected Pearce of informing Scase about him giving away stolen uniforms. He was at odds with Bayleaf after Pearce claimed he hadn't seen the motorcycle which had caused Bayleaf to crash the appliance, resulting in the usually calm Bayleaf lunging at him, and with Kevin Medhurst when Pearce informed Hallam that he suspected it was Kevin's brother Micky who had attacked Maggie at the station. He also told Georgiadis about George Green participating in an unlicensed boxing match. After Carole Webb became Sub Officer at Blackwall, Pearce was envious that she had been promoted ahead of him and did his best to undermine her.

In series 6, Hallam was seconded to the Fire Investigation Unit and Pearce promoted to acting Sub Officer. However, when Georgiadis was injured during a shout, Pearce lost control of the situation and Hallam had to take charge. At the subsequent debriefing Pearce tried to blame it on everyone else, which did not go unnoticed by the presiding officer, who called him a "pain in the arse". When Donald, a mentally disturbed man, kept visiting the station Geoff angrily chased him away. Later, Donald was trapped on the roof of a burning building and Pearce tried to talk him down, but a nervous Donald backed off and fell to his death.

Pearce was usually a competent member of the Watch -- much to the irritation of Georgiadis, as it meant he couldn't get rid of him. At a car pile up, Geoff helped a pregnant woman deliver her baby.

Patti and Geoff split up during series 8 and she filed for divorce. The watch and their wives noticed that she was missing and that Pearce never mentioned her, which led to speculation that he had murdered her. When Pearce heard the rumours it led to a blazing row and he stormed out of the station while on duty. Patti then returned and they were reconciled, but he threw her out again after seeing her meeting an officer from Bristol in a hotel. For a new companion he bought a dog, Bruno. He also made friends with fellow oddball Vernon 'Clingfilm' Chivers.

Pearce found out that Hallam was having an affair with a student, and while en route to work Hallam angrily accused him of telling Sandra. At a shout that night, they both went into a burning building to look for a group of missing girls. While leading the girls across a high gantry it gave way under Hallam's feet and Pearce was powerless to help as Hallam lost his grip and fell 80ft. Hallam died of his injuries the next day. Geoff was wracked with guilt afterwards and considered transferring away from Blackwall; he applied for a Sub Officer's post in Hampshire, but he walked out before the interview. He was also upset when he learned that Sandra Hallam had insisted that she did not want him to be one of John's pallbearers. He and Sandra later made their peace and he invited her to the talent contest at the Ship Aground . He was crestfallen when she moved away to focus on her job.

Following an unseen promotion between Series 10 and 11 and Carole's departure, Pearce became the permanent Sub Officer on Blue Watch. By Series 13, he was now a Watch Commander & in full charge of the watch as the ranks had changed: Sub officers were renamed Crew Commanders at 2 pump stations or Watch Commander Type A at 1 pump stations (although he was back as Sub Officer in Series 14, which seemed to disregard the rank changes). He struck up a friendship with a woman named Fiona while she was fitting Blue Watch's pumps with new quieter sirens. A while later, Fiona returned to Blackwall and they rekindled their friendship, despite her ex-husband once showing up and punched Geoff. Fiona eventually proposed to Geoff and after giving it some thought, he accepted. For his stag night Blue Watch hired a stripper for him, but a mix-up by Hyper meant they accidentally got a male stripper. Geoff almost called the wedding off on the day of the wedding when he found out Fiona had a grown up daughter, Zoe, whom she hadn't mentioned. Zoe herself talked him round. Fiona gave birth to a daughter, whom they named Eve, at the start of Series 13. 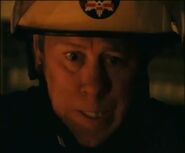 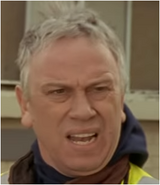 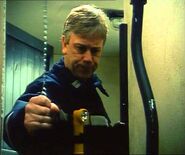