Episode 6 (series 7) is the sixth episode of the seventh series of London's Burning. It was first broadcast on October 9, 1994.

Patti is still pestering John and keeps calling him up at home. Sandra overhears the conversation and gets suspicious. Kevin gives Sally a lift to work. Donald comes to Blackwall again, and Billy lets him sit in the appliance. Pearce then spots Donald and shoos him away.

A fire breaks out at the local city farm. Sicknote spots a mangy dog in a burning barn and rushes in to rescue it, just before the roof caves in. Billy is sent in to round up the pigs and ends up rolling around in the sty, getting covered in mud and manure, to the amusement of everyone else. Sicknote brings the dog back to the station with him, where even Maggie winds up Billy with pork jokes.

Kelly's brother Denzil has another job for George, working in a burger van. Sicknote takes the dog home, but Jean evicts it to the shed immediately. Its howling keeps them awake all night. Trevor visits Bayleaf and Clare with a proposal, to invest in his restaurant in Littlehampton. Clare is unsure, but Bayleaf finds the idea appealing, seeing it as an opportunity for the future.

Sandra finds out about Patti telephoning John and goes round to the Pearces' house to confront her. An edgy Geoff says he believes John's story that there is nothing to it, but Patti will not let it rest and continues to stir it. Things get out of hand for George at the burger van and it catches fire and the white watch are called to put it out. Les and Denzil turn up and bicker with George. Les declares that George is a disaster area and they almost comes to blows and George has to be restrained by the firefighters. On the next shift, everyone has heard about George's escapades and joke about wanting burgers and hot dogs for dinner.

Donald appears at Blackwall again and Pearce angrily chases him away, threatening to call the police and has to be told to drop it and not be so heavy handed by Bayleaf. It's Lo Ming's last night before he returns home and he and Maggie prepare a feast for the watch, which is interrupted by the bells. Donald accidentally starts a fire while playing with his model fire station. Blue Watch are called to the fire when Recall spots Donald at a window. Pearce, Recall, Hallam and Sally rush to the roof, but Donald who is still worried about Geoff calling the police keeps asking for Billy and nervously backs off but treads on a piece of old guttering and falls to his death. Sally gets a visit from the drugs squad in connection with Eddie and they search the flat, wrecking it. The following day, a weary Sally loses her race. Nick takes Diane out for dinner, where she tries to patch things up but realises his real love is Ariadne. Sally invites Kevin in and they kiss and spend the night together. 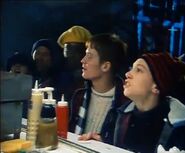 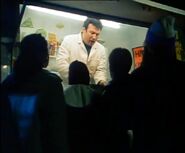 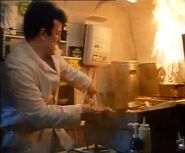 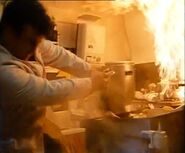 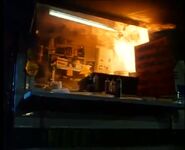 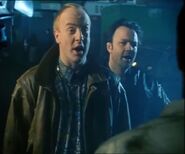 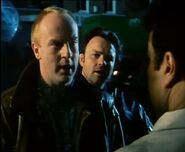 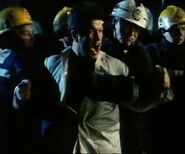 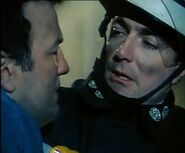