Episode 4 (series 7) is the fourth episode of the seventh series of London's Burning. It was first broadcast on September 25, 1994.

A young man with learning difficulties named Donald keeps hanging around the station, much to Pearce's annoyance. The others are fond of Donald, however; Bayleaf thinks he is just a harmless admirer of the Brigade, while Billy pays him to buy him a newspaper. Scase makes another appearance, this time to check Blue Watch's books. The exercise is interrupted by the bells and they have to free a military enthusiast who is trapped in his army tank.

A group of kids, including Ben, steal from a newsagent. Ben then doesn't return home that night. At Billy's behest, he and Kevin go out with two girls, one of whom gets very drunk. Kevin helps her to her front door only to be yelled at by her father. Patti calls Hallam to check the fuses after she was left in the dark and makes a pass at him. He is saved by Pearce's return. Ariadne and Nick have a secret meeting in a church and she urges him to make a decision before the wedding.

On night shift, the pump ladder crew is sent on standby at Thames Reach near the river. Recall talks to Sally about his problems with Ben. Pearce confides to Hallam that Patti has a history with men and tried to seduce his Station Officer in Bristol, which is why they moved to London. A police motorcyclist comes off worst during a high speed chase and is left trapped in a bog. Kevin comes up with a novel idea to rescue him based on his recent training course. Laura reports Ben missing while he wanders the streets of London. 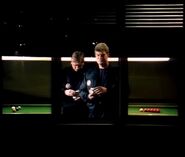 Billy got a paper from Donald and Pearce shout annoyed

Poison: IF YOU QUITE FINISH YOUR AARON BOY I TRY TO CONDUCT THE DRILL