Episode 3 (series 1) is the third episode of London's Burning's first series, first broadcast in the UK on ITV on 5 March 1988. In the episode, Charisma meets Donna and is later injured in a chemical fire.

Charisma is in a pub telling the barman that he has just won his black belt in karate. A woman named Donna starts chatting to him. She tells him that she was previously the common law wife of another firefighter, Liver Salts and that she has been forced to move out of her sister's house because her husband fancies her. Josie attends a Spanish class, where she meets David, who tries to chat her up, although she makes it clear that she isn't looking for a new relationship or a new man.

Vaseline is off work sick, but is nonetheless doing two other jobs. As a prank, Malcolm fills Sicknote's bike with cement, a little at a time so he doesn't notice. The Watch attend a small rubbish fire and are pelted with bricks by a man in one of the flats. Tate confronts the man, and finds the flat barricaded; the man is part of a small group preparing for a nuclear holocaust much to Tate's bemusment.

Charisma tells Bayleaf that his new woman has now moved in with him. He also reveals his mum died recently, although she was actually his nan, his real mum was his sister. Meanwhile, Sicknote is now finding his bike rides ever more exhausting. Hallam's crew are called out to a collapsed building, where a drunken women informs him that one of her friends is trapped. On that basis, Hallam calls out reinforcements to carry out a search, but the missing person reappears, unharmed. Tate is fuming and gives Hallam an angry dressing down.

Donna turns up at the station while everyone is out on a shout, wanting money from Charisma. When they return George recognises her as Donna, "the Martini girl" ("any time, any place, any where"). When she and Liver Salts split up he had to take her to court to get rid of her. She successfully argued that she was his common law wife, and as such was awarded half of everything he owned, including his house. Bayleaf visits Karen at her mother's house. He later goes to collect Melanie from school and Melanie gets upset when she can't go home with him. Tate tells Nancy that he cannot cope with the job any more and has panic attacks. She dismisses his fears as the male menopause.

David rings Josie at work to ask her out for a drink and Liver Salts walks into the mess. He warns Charisma that Donna will make a fool of him and they almost have a fight, but are interrupted by the bells. The watch have been called to a fire involving chemicals. Tate warns everyone to keep clear but Charisma, still angry after the row with Liver Salts about Donna, gets too close to the fire. The chemicals in the building explode and Charisma is thrown back by the blast and burned. He is pulled clear and rushed to hospital. Back at the station, it dawns on everyone that Donna is his only next of kin.

Sicknote falls off his bike and notices it is full of sand, and realises he's been had. Josie goes to visit Charisma in hospital and finally meets Donna. Donna goes in to see him but appears more concerned about the compensation he could receive from the Brigade. A half conscious Charisma starts singing "any time, any place, any where." 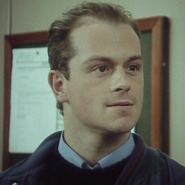