"Ding Dong Merrily" is a Christmas special episode of London's Burning which was first aired on 25 December 1988. This was the last episode to feature Blue Watch wearing their silver-buttoned black tunics and yellow leggings. In Series 2, they wear blue Nomex suits.

Christmas is approaching, and Josie, Bayleaf, Kevin and Malcolm spot Charisma dressed up as Santa Claus collecting money for charity, only for him to be pickpocketed by two youths who nearly get away. The watch draw lots to decide who gets to have Christmas Day off; Vaseline gets the full day and Tony gets a first reserve for staff shortages at other stations, much to Sicknote's annoyance, as he was hoping to appear in a Christmas panto. And George hasn't had a Christmas off in 4 years

The gearbox is being fixed on one of Blackwall's pumps, so they are given a rusting older appliance as a stopgap. While racing to a shout, it collides with a car being driven by a drunk man and tips over. No one is seriously hurt in the accident. After the shift they all head to the pub. A fuming Marion appears, looking for Vaseline (he told her he'd be there, but he isn't), but she stays anyway. Josie shows up unexpectedly, furious that her mother had invited Gerry to their Christmas meal. Charisma comes home and finds Donna selling unsafe black market toys. Josie and Bayleaf end up spending the evening together and sleeping with each other. Josie immediately regrets it and tells him to leave. The next morning a visibly hungover Josie shuns Bayleaf and gives the rest of the watch a piece of her mind.

George and Vaseline moonlight as chauffeurs for George's brother-in-law Cyril. George is arrested for kerb crawling (by a policewoman disguised as a prostitute) and Vaseline crashes his car into a house after being distracted by his passengers making out on the back seat. Tony and Dorothy have Christmas dinner with their parents, who do not get along, and both finally snap and walk out. Over Christmas the Tates take in Paul, a boy with half limbs. Kevin's father escapes from prison and turns up at Blackwall, to Kevin's embarrassment. George phones Cyril from the police station, but Cyril gives him an angry tirade before hanging up.

Hallam's eyebrows are burned off after his father-in-law douses the Christmas pudding with too much brandy, a source of amusement for the watch when Hallam shows up for duty. The watch are called to a domestic flooding at a restaurant where Vaseline is having dinner with Marion. Suddenly the kitchen explodes when a member of staff lights a cigarette, unaware that the gas is still on. Afterwards they all return to Blackwall for Christmas dinner. George, finally released from the police station, also turns up and notices Hallam's missing eyebrows, prompting them all to start singing: "Ding Dong Merrily on High, the Sub has got no eyebrows!" 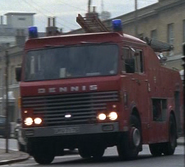