Bert Quigley joined the London Fire Brigade in 1976. He was married to Jean. The Quigleys originally had children, but they were ret-conned out much later in the series. Sicknote was thin-skinned, pompous and a chronic hypochondriac, and constantly moaned about his ailments, from toothache to backache, which earned him his nickname.

Sicknote was also an ambitious thespian with an operatic singing voice (he called himself the "Penge Pavarotti") and had dreams of turning professional. He and Jean were members of their local theatrical group, the Penge Occasional Players Society (POPS). Sicknote was fond of breaking into song at unexpected moments and was usually in a stage production, which the other members of the watch grudgingly attended. During his performance of The Student Prince, Malcolm directed the others to sing along to "Drink! Drink! Drink!", to Sicknote's annoyance. Sicknote was gutted when he could not get Christmas day off, as it meant he would miss the POPS production of Cinderella. He used his voice to help George in the pursuit of love by singing behind a tree whilst George mimed along as he serenaded Julia.

In 1988 Sicknote and the rest of Blue Watch were hosting an open day at the station, with Sicknote dressed as a banana, when they were involved in an armed siege. Following a long stand-off, Sidney Tate’s negotiating abilities and the use of Sicknote's acting skills, the watch were freed unharmed. During a shout to rescue two window cleaners trapped in a high rise cradle, Sicknote had to climb down to the cradle by rope to facilitate a rescue.

When POPS recruited Dominic, a new leading man, Sicknote became jealous of the amount of time he was spending with Jean. Sicknote resigned in protest, walked out on Jean and moved in with Charisma, much to Charisma's dismay who was driven mad by Sicknote's peculiar ways. When Dominic injured his larynx Sicknote was asked to reprise the lead role and Jean invited him to move back in with her. Later, it was Jean's turn to be jealous as Sicknote chose Cynthia to star alongside him in Richard III. He and Cynthia had a brief affair, but Cynthia became obsessed and wouldn't leave him alone. Jean walked into his dressing room and punched him after catching him and Cynthia in an embrace, meaning he had to finish the performance with a shiner. She walked out on him, but decided to return when she saw him on a news item after rescuing a mother and a baby.

Sicknote had a keen interest in green and health issues. He campaigned against smoking in the station mess due to the adverse effects it was having on his health. He led a campaign to prevent the closure of a local city farm, taking a petition to Number 10 Downing Street, and was elected a local councilor for the Green party, but after being overrun with complaining pensioners (returning home to find one chained to his railings) he gave up the job. Conscious of his receding hairline, he bought a wig, which all of the watch pretended not to notice. He continued to wear it until it was accidentally torn off by DO Scase during a charity raft race.

In his later years at Blackwall Sicknote became the mother hen of the watch after Bayleaf's departure. He received his 20 years service medal, which he pessimistically regarded as confirmation of old age. He bought a metal detector and accidentally blew up a retired couple's allotment when he found an un-exploded hand grenade. He joined a protest movement aimed at stopping the building of a new road through the woods, however he hastily withdrew his support when he realized that the alternative route ran past their house.

He took a job as a DJ on Hospital Radio, found he had a flair for it and styled himself "Whispering Bert Q". To the surprise of both him and Jean, she fell pregnant during series 11, and both were left devastated when she miscarried. They subsequently fostered a boy named Owen. Whilst attending a shout at a Chinese warehouse in Sicknote and fellow firefighter Joe Walker were killed instantly following a fireworks explosion.

I've got a toothache sir I can't talk!

In his research for the original London's Burning film, Jack Rosenthal was told about a real-life fireman who was both a daydreamer who thought he was Jack the Lad, and a hypochondriac who was constantly swinging the lead. Rosenthal thought no one would believe such a character, so he split the personality traits into two separate roles: Sicknote and Charisma.

Although many believe the date of both Quigley and Walkers death to be in 1999 or 2000 there has never been a confirmed date, in episode 1 of series 13 a plaque has their death date on the 5th of October 2000, but later on in the series there is another plaque suggesting the two died in 1999, although the later episode also features John Hallams death date wrong compared to his plaque in Series 9. 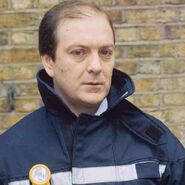 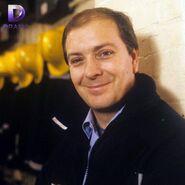 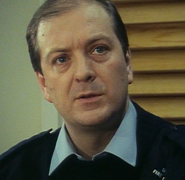